You go to the stadium to watch the games right? Turns out most of us are there to socialize, eat food, and wait in line for the bathroom, because the views are too far away, you can’t switch between them, and there’s no instant replay. What if you want to watch the game the way you can zoom in, switch views, and go back in time the way you can online or with a remote control, but still soak up the spirit and the comradeship of the stadium?

Motion Offense is an app that uses 5G to provide live video and stadium feeds during sporting events, so you can virtually go to any place with a feed during a game, be notified of exciting action that are coming or has happened, and use a memory bank of amazing game moments.

We are big sports fans, and we started by asking how to encourage non-fans to go to sporting events live instead of watching at home. We talked to 42 people novice to watching sports in this round and found that folks like to watch at home most frequently because of the ease of staying in, having food and bathroom readily available, having friends to watch with and explain the game, and having access to player profiles and switching channels. We also went to venues like Yankee stadium and asked folks about pain points of going to a game. While we expected novices to want explanations of rules and AR content, the compiled stats tell us a different story. What they most missed having are

Our insight is that people didn’t need to understand what is going on, they just want to be able to see the game well, and to not miss it when amazing stuff happens. 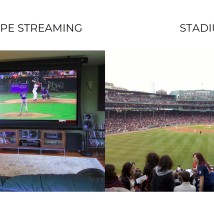 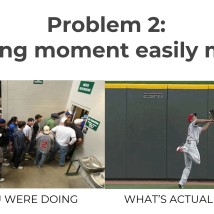 Our first prototype was done on paper, and attempted address most of the pain points like having to wait for food at the stadium and the ability to take a selfie with friends with stadium and team backgrounds. Testing it with users who are new to sports told us that the abundance of feature make the app less useful. It was pointed out to us that competing apps exist for the Barclay center, and that many of the pain points are only valid for a small segment of live game-goers. Moreover, the process of registering and using the app was a major barrier. The users wanted to see more of the players themselves so they can learn more about them and follow them while the game happens.

The next prototype is constructed in invision. Here we simplified the logon process so that all that is needed is a code on the ticket already purchased. We also made the player info section more prominent and introduced a way to view different clips by swiping. We also made the selfie mode more like what a camera looks like on the phone. The digital prototype allowed us to do some micro-testing with the interface. We found problems like excessive confusion on the food ordering menu and icon confusion like shopping carts that don’t mean anything. Moreover people wanted to personalize their content so that the app looks like it’s for them. The overall big question from this cohort of 20 testers is how they can control the view. The invision app didn’t give us enough control over how to switch between game views.

Figma gave us a way to link up different pages corresponding to different game views. We decided to abandon features like food ordering and AR selfies to concentrate on the two biggest points on our agenda. We made two main screens on figma. One is for changing the view from different feeds from users in the stadium broadcasting via periscope or feeds from TV or from the stadium cameras. The second is for looking at the most important and amazing moments from the game, such as scoring changes late in the game and highlights from scenes curated on youtube.

User testing with the first figma prototype showed us that streaming views can be simplified to a map of the current stadium plan, while the saved videos can best be shown in a timeline of the game. Users also told us that they wanted to be alerted when great moments occur. This is especially true for newer fans who don’t know when touchdowns are imminent or don’t keep track of how many innings are in a baseball game. Using advanced stats and Machine Learning, the engine would calculate the point in the game where scoring may happen, such as a player on third base or football on the 1st down and goal, and alert users to go to the video display on the phone (as opposed to the map view).

The following micro interactions are modeled: 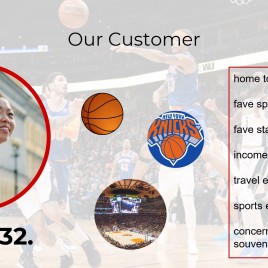 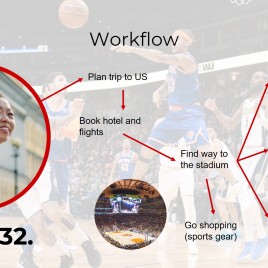 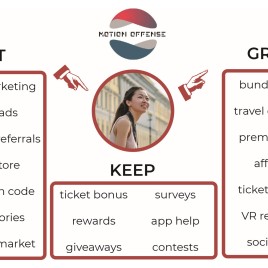 On the customer discovery side of Motion Offense, we began with an idea of introducing casual tourists visiting New York to sports venues. During the initial phase of the 42 interviews, we found that the sports tourism market for casual fans can be hard to work with, because they would only use the app one time, and they are often there just to soak up environment with no regard to how to view the game. Thus we pivoted our business canvas model to focus on fan experience at the game, addressing the two biggest needs of seeing the whole game (views) and experiencing amazing moments (memory and alerts). We spoke to stadium execs to understand how cameras there work, to AR and VR designers who gave us the low down on what works at a sporting venue, to fan experience directors who wish to increase stadium attendance (especially in baseball), etc. The final model presented is an app bundled with ticket sales that partners with teams to deliver content that increases fan engagement and drive more of them to come to the game again. Working with stadiums, teams, and companies holding streaming rights of games, we help each other by helping the fan at the game watch more of the game, and experience more of the infectious excitement at a live sporting event. 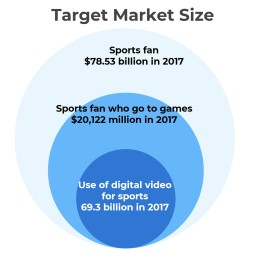 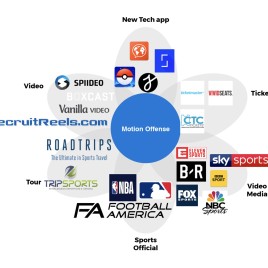 This work was funded by Verizon and Yahoo Sports. It was featured at NYC Media Lab Media Technology Innovation Showcase, 2018. Here is our final presentation.